<< Back to All Resources

How Can Organizations Help Close the Pay Gap? Six Steps to Improve Equity.

Organizations are increasingly focusing their efforts to ensure that they are paying their employees fairly and not discriminating on the basis of sex or race/ethnicity. This increased focus is due to a combination of a desire to do the right thing, comply with federal and state equal pay laws, and respond to pressure from shareholders to narrow the pay gap. As shown in the table below, commonly published national statistics indicate that the average salary for women is only 81% of the average salary for men. In reviewing these statistics, it is important to keep in mind that these national statistics do not control for important factors such as job title, education, and experience. When these factors are controlled for, the gap narrows to about 4–7% (CONSAD, 2009). 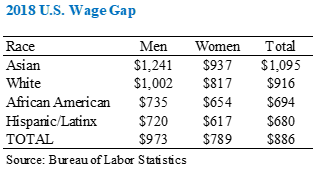 Regardless of the size of the actual wage gap, we know that it is not zero. Fortunately, there are many steps an organization can take to narrow or eliminate the gap.

Each year, an organization should conduct a study to ensure that its employees are being paid in a non-discriminatory manner. Most federal contractors are already required by law to annually conduct such a study. Although there are many ways in which these studies can be conducted, the typical study uses a regression analysis to determine if there are unexplained sex and race/ethnicity differences in salary after controlling for job-related factors thought to be related to pay.

As alluded to previously, much of the national wage gap is due to sex and race/ethnicity differences in the jobs in which people are employed (CONSAD, 2009). For example, engineers are more likely to be men, and clerical staff are more likely to be women. Thus, recruiting and hiring women and minorities into higher paying jobs is an essential step toward closing the wage gap. Toward that end, organizations should annually evaluate their hiring data to determine the extent to which their hiring practices have adverse impact (disparate group rates of being hired). If adverse impact is observed, the organization must ensure that the hiring practice is job related and consistent with business necessity. Furthermore, you should compare sex and race/ethnicity differences between the people you employ (utilization) and the percentage of each group in the qualified workforce (availability).

Steering is the practice, usually unconsciously, of placing applicants in particular jobs due to sex, race/ethnicity, or age stereotypes. Steering differs from traditional hiring discrimination in that the person is actually hired but is placed in a job based on the stereotypes previously mentioned. For example, an organization might hire two laborers and place the male employee in a warehouse job and the female one in the assembler job based on the stereotype that men are stronger than women and women have better dexterity then men. Steering can especially affect the wage gap if women are steered into lower paying jobs or jobs with a lower probability of upward movement. To avoid potential steering, have applicants apply for a specific job or assignment rather than to a general opening. If a general requisition is used, randomly assign the new employee to the available assignments.

In addition to conducting salary equity analyses, you can also conduct studies to determine if there are statistically significant sex or race/ethnicity differences in the percentage of employees that are promoted as well as the average time it takes to receive a promotion. Organizations should also evaluate how promotion opportunities are announced. That is, are all employees made aware of an opening or does a supervisor tell only a favorite employee about the opportunity?

Because annual merit raises are typically based on supervisor ratings of an employee’s performance, an important step in closing the pay gap is to monitor sex and race/ethnicity differences in these ratings as well as to monitor the actual pay increase that is recommended based on these ratings. That is, if a male and a female employee each receives a rating of 4, are their actual salary increase percentages similar?

CONSAD Research Corporation (2009). An analysis of the reasons for the disparity in wages between men and women. https://www.shrm.org/hr-today/public-policy/hr-public-policy-issues/Documents/Gender%20Wage%20Gap%20Final%20Report.pdf

This article was originally published by the Society for Industrial and Organizational Psychology.